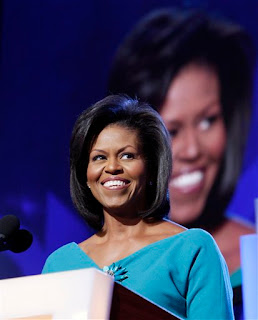 A Note From Ms. Aja B.
Hello Ladies & Gents!
I haven't discussed politics much on Belle-Noir Mag because I am admittedly very biased. I am a proud Democrat and while I would have voted for whomever was the Democratic presidential nominee, I couldn't be prouder that it is Senator Barack Obama.
I have been watching the National Conventions since I was old enough to vote. Bill Clinton was the first President I was old enough to vote for back in 1996. And I remember four years ago watching this young man from Illinois (whose name I admit to always reversing at first--calling him Obama Barack with enthusiam LOL) dazzle the crowds at that Democratic National Convention and wondering--maybe?
Who would have known then that my favorite part of his race to 1600 Pennsylvania Avenue would actually be his wife, Mrs. Michelle Obama. A friend teased me the other day and said that my infatuation with her was because she is now a soror. While that might have admittedly increased the admiration, I was a fan. Long before the "controversial" fist bump, it was this picture that made me want to find out all the more about Mrs. Obama. 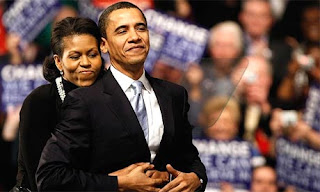 The love, the compassion--it was something that I didn't recall ever really seeing (nor believing) with the Clintons. But here they were: Mr. and Mrs. Obama, sharing the moment together. Husband and Wife.

For those who are unfamiliar with who she is, I'd suggest checking out the cover story article about her in Ebony Magazine, as well as the article on the Obama family in the recent Essence magazine as well. They provide insight into this family that might, in just a few months, bring this nation it's first Black President & First Lady.

I loved her speech last night. I think she definitely silenced her critics who keep replaying her mispoken comment in which she stated that this was the "the first time" she was proud to be American. I feel her speech truly got to the heart of how so many Americans are feeling right now (the part about the empty seat at the dinner table made me misty-eyed) and definitely spoke to not only unifying the party, but reminding the country that we have more in common than we have actual differences.

This morning on several female-orientated blogs, I have seen people (mostly men) come out of nowhere in comments sections still spouting the same old "oh, he's Muslim and she's a militant" rhetoric. I don't know if they just refuse to listen, or they are hearing something I'm not.

The rest of the Convention will be equally as interesting. Especially with the Clintons taking center stage tonight. I'd love to do the live blogging thing that folks do, but I think I will leave that to the wonderful people over at MichelleObamaWatch.com.

P.S. Please note: the opinions expressed above are obviously my own. While I am definitely Pro-Obama, the most important thing for anyone to do in November, regardless of who you support, is to VOTE in November.

Departments: michelle obama, note from ms. aja b, the race 08