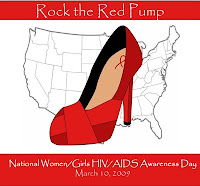 Today, March 10, is National Women & Girls HIV/AIDS Awareness Day. I am so proud to be joining a growing list of bloggers who are today, taking the time to discuss the importance of being educated about HIV/AIDS, especially when it comes to women, as part of The Red Pump Project.

Created by bloggers Karyn of The Fabulous Giver and Luvvie of Awesomely Luvvie, The Red Pump Project was created "to represent the strength and courage of women fighting HIV/AIDS or affected by the disease both directly and indirectly. We ask that on that day (March 10th), you embed the Red Pump Widget within your post with a short snippet of its significance, or you can rock the widget on your sidebar for the day."

Bravo to Karyn and Luvvie for creating what I have a huge feeling is going to definitely be a major movement across the U.S. There are already some Rock The Red Pump events scheduled for Chicago and Kansas City. I'm sure there will be more happening across the US in the coming weeks!

statistics courtesy The Center For Disease Control
Departments: facing facts, living it up

We really appreciate you helping us Rock the Red Pump today! It's amazing to see all the blog entries go up and just thinking about all the people reading about the HIV/AIDS in women and girls is powerful! Thanks again for your participation! :-)

Thanks you SOOOOO much for participating in the RED Pump Project! We appreciate you and the other female bloggers for being a part of this initiative to raise awareness on the effect of HIV/AIDS on Women & Girls. Much Love!

P.S. If you're rocking red pumps today, you can upload a picture to the Red Pump Project Flickr group at http://www.flickr.com/groups/redpumpproject/