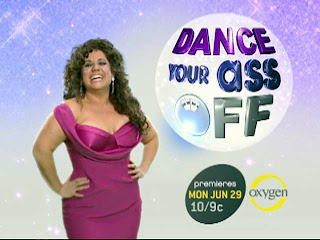 'More to Love,' 'Dance Your A** Off' Expose Full-Figured Women,
Sometimes in Questionable Ways
By SHEILA MARIKAR (For ABCNews.com)

Watching a 33-year-old mom clad in a Catholic school girl's uniform gyrate her perhaps size 16 hips on a stripper pole begs many questions, but none (no pun intended) bigger than this: Why, and for what purpose?

The answer seems easy on the surface. The mom in question was, at the time, a contestant on "Dance Your A** Off," the Oxygen network's uber successful reality competition in which overweight contenders attempt to shimmy and shake off extra pounds. An amalgam of "The Biggest Loser" and "So You Think You Can Dance," "Dance Your A** Off" debuted on Oxygen in June, setting a network record of 1.3 million total viewers with its first episode.

Simple enough, right? She wanted to lose weight and reveled in doing it for the cameras; Oxygen figured out a formula to boost ratings.

But once you get beyond the superficial, figuring out the "why and for what purpose" can get more murky. The question doesn't just apply to "Dance Your A** Off," which, to be fair, features male and female contestants -- it goes for most of the small but growing genre of overweight-and- on-camera reality TV, notably "More to Love," the new FOX series in which full-figured women compete for the heart of a similarly hefty bachelor.

For Sally Ann Salsano, the executive producer of both shows, the goal is altruistic.

"These shows are about teaching you to be OK with yourself," she said. "That you don't have to be stick thin to find love or be healthy, and getting those things doesn't have to be a miserable process."

Others, like Samhita Mukhopadhyay, editor of the blog Feministing. com, wonder if audiences absorb a different message.

"These people put themselves on display in a way that viewers just eat up. Sometimes I cringe because it seems so humiliating for the person," she said. "It speaks to the general anxiety of fat women: You're a slob, you can't find love, you hate yourself."

It all boils down to the question of "fatsploitation" : Do shows like "More to Love," "Dance Your A** Off" and other similarly premised reality TV competitions exploit the size of their female contenders for entertainment value?

Here, the answers aren't simple at all. Take "More to Love": While on the one hand, it's refreshing to see, from a fairness perspective, that women who are not stick-thin size zeros can play the same courting games as their counterparts on "The Bachelor," listening to contenders in the introductory episode sniff and snivel, "I just want people to love me for me" and "I don't want to be alone, I really, really want to have that love story" makes them all seem pretty pathetic.

"There were a lot of tales. It was very weepy," Emme, the plus-size model who hosts "More to Love," conceded about the show's premiere. "But I think that's reflective of what's going on -- the frustration, the self-loathing. It's a travesty that women above a size 12 feel like they can't find love."

"I wish that there were more self-esteem- infused girls on the show. They are not reflective of all full-figured women," Emme added. "I can't wait to see the 'Bachelorette' version of this. I would love to see a very confident woman owning her curvaceous body and trying to find a wonderful guy."

The problem may be that until such a woman graces reality TV with her presence --former, feisty "America's Next Top Model" contestant Toccara Jones may be her closest cousin, though despite her curve confidence, she ended up on VH1's "Celebrity Fit Club: Boot Camp" shortly after the competition -- the market is flooded with full-figured females bemoaning their pant size and/or lack of dates.

To Feministing editor Mukhopadhyay, that perpetuates the impression that these women are to be pitied and fetishized for their size.

"On one level, it's good to have more images of larger women on TV because that act alone changes the way we look at people," she said. "But so many of them have low self-esteem, they're self-loathing, they talk about how no one loves them. It becomes this sort of spectacle. You really do wonder if all the stereotypes you've heard of fat people are true. On that level I do think it's exploitive."
Departments: the scene

I think that you hit it on the head by saying this issue is a double edged sword. On the one hand they are showing what has never been seen but on the other they are not showing it in the best light.

I have dropped both More To Love and Dance your A** off from my tv watching. I do not have to watch a train that is about to crash to know that it crashed. Both shows are just painful to watch.

I also cringe when I even think about the show. Honestly I feel that these type shows are really just getting laughs for certain people who watch it. Its like a circus show, they bring the freaks out that "normal" peopel have never seen, the only thing is they make them "normal" in the end. I dont think it takes a TV show to help these people loose weight. It just doesnt seem right. I mean look at the PETA ad, that shows how they really feel about overweight peopel.