NY Times Magazine Cover Featuring Precious star Gabby Sidibe.
Read the article here.
This Friday, the film Precious, starring Mo'Nique, Gabourey "Gabby" Sidibe, and a host of other celebs, opens in theaters. The film, produced by Oprah and Tyler Perry, received rave reviews at this year's Sundance Film festival, winning the Grand Jury prize, the Audience Award, and a Special JuryPrize for Acting for Mo'Nique. People have been talking about the trailer, about newcomer Gabby Sidibe, and the raw emotions that just watching the 2 minute 30 second trailer bring to the surface.

Many people have read the book "Push" by Sapphire, and as is usually the case with films based on novels, people are wary about whether they should check out the film. Some are calling the concept and theme of Precious "old" are saying that it "has been done before" based on the character played by Paula Patton (i.e. the teacher who truly cares coming in to save the day a la Michelle Pfifer's Dangerous Minds). Others are saying that it is a movie that must be supported and seen in the theaters because it shines light on mental illness, molestation and abuse. 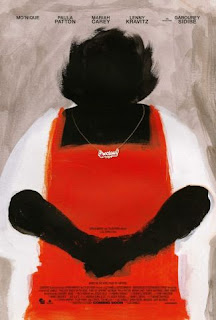 Mo'Nique talks about the film in a great article by blogger Eric Kohn and talks about why Precious (which was still named after the novel at the time of the Sundance Festival) is a must see movie that should not be typecast because of its predominantly black cast:

"When you say, “It’s a black movie,” what makes it a black movie? Because we are all black people? When have you ever said, “It’s a white movie”? It’s just a movie. The moment we stop making that separation, it becomes a movie and the people just happen to be black, but it is so universal."- Mo'Nique

Are you going to see Precious when it hits theaters this weekend?
Departments: the scene

I can't wait to see it though I live in a very unhip city so I'm sure I'm going to have to travel to view it!

My bookclub is going to see it on Sunday. At first I was very leary after reading the book. I'm excited after your blog. Thanks

Hey stopping by from BlogsHErColor.com this is a great post. I'm ver excited about seeing this movie and this just added to the excitement. I love Monique's quote she is so right about that a film should be seen as a film not black or white. even from the previews you can see that this more than just a stereotypical film.