THIS JUST IN: Manik Magazine features new Anti-PETA "Save The Apology" Ad

at 9:54 AM By Unknown
Editor's Note: Kudos & Bravo to Selina Weeks and the Manik Magazine staff for an awesome and artistic piece of work that tells PETA that the plus community will not accept their tired apology after their insulting ad! -Ms. Aja B.
FOR IMMEDIATE RELEASE

Appalled by PETA’s advertising campaigns that push for the ethical treatment of animals at the plus-size community’s expense, ManiK kicks off their themed: INNOVATIVE ACTIVIST premiere issue scheduled for December with their Anti-PETA Ad of a plus-size vixen in an implied nude shot draped in fur that reads, “SAVE THE APOLOGY, LOSE THE SARCASM – I’D RATHER GO NAKED TRIMMED IN FUR. STARRING NEW ACTIVISTS – PEOPLE FOR THE ETHICAL TREATMENT OF ALL. ManiK MAGAZINE. http://www.manikmag.com/. STANDING FOR SOMETHING WHILE FALLING FOR NOTHING TAKES GREAT STRENGTH BUT YOU CAN BE BETTER AND DO BETTER. STOP INSULTING OTHERS TO PROMOTE YOUR AGENDA. GO ETHICAL FOR ALL!”

Manik Magazine founder, Selina Weekes, was outraged at PETA’s billboard posted in August 2009 in Jacksonville , Florida , that suggests overweight people are synonymous with whales and should lose the “blubber.” Rather than be a silent advocate for the oppressed, Manik Magazine is asking readers to get involved by posting their Anti-PETA ad as a default picture on their social networking sites for one week, starting November 16-21, to show solidarity for their interactive campaign to stand up against ostracism and ridicule from organizations that subliminally degrade fuller figures. 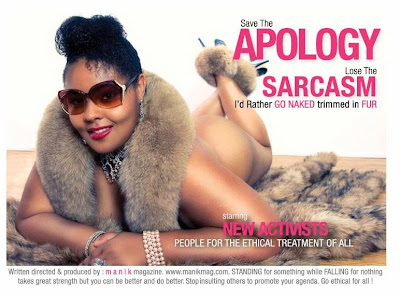 I LOVE this ad. Its my first time viewing it, but I believe alot more companies should place ads like this against PETA. Personally I feel the organization goes entirely too far when it comes to getting their point across, especially over animals. If they put that much energy towards ppl getting healthcare or jobs or school system they would really be a force to be reckoned with. They probably get some type of kick back from the govment man (in my hippy voice)somewhere some how because they are just too dogmatic . .. over a dog and cat! Please