at 8:00 AM By Marcy
Today, I saw a link posted on Facebook from the U.S. Air Force website with the following title: "AF first female maintenance officer leads way as first African-American female general". When I clicked over, I read about Maj. Gen. Marcelite Harris, a phenomenal woman who, as the article states, broke so many racial and gender barriers during a great Air Force career to become the first female African-American general in 1991. WOW! When I read things like this, it just makes me feel so empowered and so inspired. It truly says "Nothing is impossible."
February is Black History Month and I could not let this month go by without paying homage to some of the great, amazing Black women, like Maj. Gen. Marcelite Harris, who have paved the way for others to follow in their footsteps. They have made it possible for us to believe that we can do anything we set our minds to and thus, changing history. Not only did they have to endure racism because of the color of their skin but they also had to endure sexism because let's keep it real here....we live in a man's world.
It is getting better but it is only getting better because more of us women are stepping up and showing the world that we can accomplish just as much as a man can. We can do the jobs that many think only men can do. We show the world that we are fearless, we are bold and we are determined. These amazing Black women are the women who I wanted to be like when I grew up...still do. They keep me inspired and grounded with my eye on the prize. I hope you can be inspired by them as I am on a daily basis.
I have learned over the years that when one's mind is made up, this diminishes fear; knowing what must be done does away with fear. ~ Rosa Parks 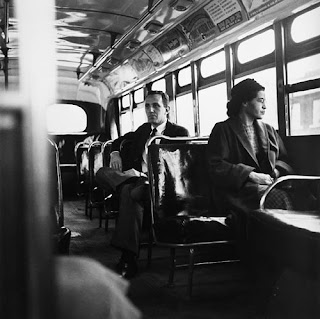 Ms. Rosa Parks...I remember when I first studied the civil rights movement in elementary school. Many of my fellow students were more interested in Martin Luther King Jr. and Booker T. Washington, whereas I was fascinated by Ms. Rosa Parks. Here was a woman who was just trying to get home after a long, hard day of work and in one moment on her way home on a public bus, she ended up being one of the most revered civil rights activists in African-American history, nationally known as "the mother of the modern day civil rights movement". She refused to give up her seat to a white passenger. She was tired and honestly, didn't feel like getting up. Why should she? She stood up for what she believed in. As she said in her quote above, once your mind is made up, your fear is gone. She wasn't the first person to not want to give up her seat on the bus. However, her act of "disobedience" is what triggered the Montgomery Bus boycott.
I love this excerpt from an 1992 interview that Ms Parks did with National Public Radio's Lynn Neary where she explains how she felt in that moment and why she decided to not give up her seat: "I did not want to be mistreated, I did not want to be deprived of a seat that I had paid for. It was just time... there was opportunity for me to take a stand to express the way I felt about being treated in that manner. I had not planned to get arrested. I had plenty to do without having to end up in jail. But when I had to face that decision, I didn't hesitate to do so because I felt that we had endured that too long. The more we gave in, the more we complied with that kind of treatment, the more oppressive it became." Rosa Parks taught me you should always stand up for yourself and what you believe in. Thank you, Ms. Parks for that valuable lesson.
“Tremendous amounts of talent are lost to our society just because that talent wears a skirt” ~ Shirley Chisholm 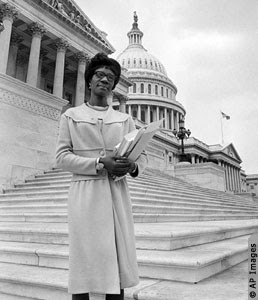 Because of Shirley Chisholm, I got so interested in the law growing up and at one point, wanted to be a judge. These were big dreams for a Puerto-rican girl growing up in the projects in Queens, New York but Ms Chisholm made me feel like if she can do it, I can do it! I was intrigued and in awe of this woman, who became the first Black woman elected to Congress, the first black presidential candidate for a major party and the first woman to run for the Democratic presidential nomination in 1972. Ms. Chisholm epitomized the women's movement for me - she was strong, vocal and fearless in her crusade for equal rights for women and just change overall.
As you can see from her quote above, she did not mince words. This was a woman who said what was on her mind eloquently and then put action behind her words. In 1993, she was inducted in the National Women's Hall of Fame. I love this quote from Ms Chisholm from the documentary film Shirley Chisholm '72: Unbought and Unbossed: "When I die, I want to be remembered as a woman who lived in the twentieth century and who dared to be a catalyst for change. I don't want be remembered as the first black woman who went to Congress, and I don't even want to be remembered as the first woman who happen to be black to make a bid for the presidency. I want to be remembered as a woman who fought for change in the twentieth century. That's what I want." Amen, Ms Chisholm! Your legacy definitely lives on and you will never be forgotten.
"Don't let anyone rob you of your imagination, your creativity, or your curiosity. It's your place in the world; it's your life. Go on and do all you can with it, and make it the life you want to live." ~ Mae Jemison 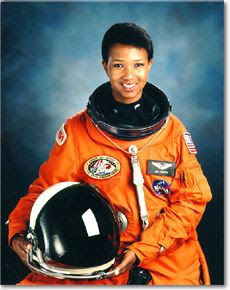 I have a picture of Mae Jemison on my positivity wall, right next to my vision board. It's that serious. She is one of my heroes. She is that person who is at the top of my list of people I want to meet in my lifetime. When I was a kid, I was obsessed with space and science fiction. Still am to this day. Back in the 60's, when Mae was a kid, she knew she wanted to be a scientist. Mae makes it cool to be a book nerd. When she was a kid, she loved to go to the library and read about science and loved stories that featured women scientists and female heroines. That empowered her and made her feel like she could be that scientist she longed to be. She also loved the arts and studied dance from the age of 9 and on. When it came time to make a decision on what to study in college, the arts or medicine, she chose the latter. She went on to medical school and became a medical doctor.
She joined NASA's astronaut program in 1987 and in 1992, Mae became the first African American woman to orbit the Earth on the Space Shuttle Endeavor. This is a woman who has done it all. Besides being a doctor, a dancer and an astronaut, she was in the Peace Corps for 2 years as a medical officer, holds 9 honorary doctorates in science, engineering, letters, and the humanities and now runs her own company researching how technology can be applied to daily life. She also continues to be an advocate for getting minority students more interested in science. What young girl would NOT want to be like Mae or follow in her footsteps?
These three women each have had such an impact on history and on many women's lives. I know they have inspired me to be a better person and like I said before, they are really a testament to the belief that nothing is impossible if you have your mind set on it. Whether you're standing up for yourself and making your voice heard like Rosa Parks, determined to make a change in this world like Shirley Chisholm or have the desire to fulfill your dreams (no matter how big) like Mae Jemison, we are honoring their legacy by being the best women we can be in this world. Next week, I will showcase a few more phenomenal women to close out this special month. Until then, be inspired, be bold, be fearless. 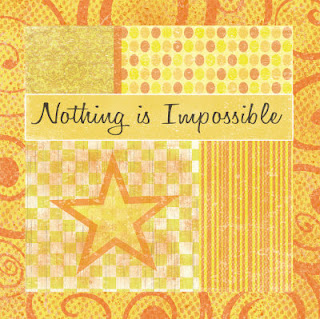 Wonderful points you've made here Marcy. There is no greater victory than overcoming the obstacles the world and society place in your path. It's great to celebrate those types of accomplishments!