at 1:15 PM By Unknown
I am sure that by now you have heard about how ABC has refused to air a new Lane Bryant lingerie ad. According to an article in today's New York Post, ABC wanted to edit the ad and then air it in the last 10 minutes of Dancing with the Stars. Lane Bryant has since made a deal to air the commercial on Fox during American Idol next week and, according to an ad I received from Lane Bryant a few nights in May as well.

Have you seen the ad? If not, take a peek:


ABC, you have a lot of damn nerve. Please view exhibit A: 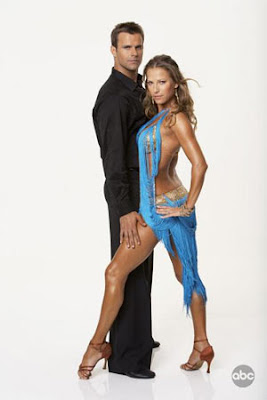 The above picture is of professional ballroom dancer Edyta Sliwinska and ABC Daytime soap star Cameron Matheson in their photo for when Cameron was on DWTS. Now, I personally *love* Edyta. I think she is an awesone dancer and she has a body that does.not.quit. And quite honestly, the costume she is wearing in the above picture is tame compared to the outfits that the DWTS wardrobe team drapes her in every week.
And that is exactly my point. ABC is fine with parading the professional dancers (and even some of the celebrities) on DWTS in little more than a nude colored bra and panty with sequins and fabric every season, but they do not want to air the Lane Bryant ad? Just last week, one of the professional dancers danced a rhumba in a black bra and panty set with a man's white dress shirt--open, mind you--for an audienece of millions on TV.
Hmmm....
The plus model in the Lane Bryant ad, Ashley Graham, is a size 16--a little over the size 14 that is supposed to be the size of  the average woman in America. Is it because she has a size 38D cup? Is it because Lane Bryant has the gaul to show a plus size woman in a sexy situation?
Even Wendy Williams, who I thought would have been all over ABC for not wanting to air the ad, tried to give the "as a mom, I'm not sure I want my kids to see that ad on TV" arguement on her show this morning. Huh? So then I guess you will be the first to say that Victoria's Secret ads should be pulled from ABC right now, right?
Do you think ABC is right for not wanting to air the ad? Is there a double standard at work here? Discuss...
Departments: facing facts, the scene

That's really a pity ABC has a double standard when it comes to plus size women. But I think everyone should stay out of their panties and bras on tv, if even after 10pm.

After looking at the ad, I have to agree ABC does have a double standard. A lot of plus size and plus plus size women are ashamed of thier bodies because of people like ABC. If bras and panties should not be on TV, then there are a lot of our favorite programs that will have to be discontinued. OOPS, everybody just quit watching the boring TV!!!!

I knew this type of thing would happen. I'm a clothing designer especially for plus-size women. I think they're beautiful and ought to be seen as sexy.