I am so hooked right now on the new television show The New Normal on NBC. This week's episode really hit home for me because it was all about dealing with ignorant people in the world. Someone somewhere will always have something to say. I know that fact very well from being a plus size woman in this world. When you're different and don't fit someone's idea of what is standard or "normal", it makes them uncomfortable and we end up being the brunt of their backlash and ignorance.

After spending many years, being so angry about it, I realized that I cannot fight the world. So I trained myself to ignore it. It took years for me to get to a place where I learned how to be oblivious to the stares and comments. The saying "Ignorance is bliss" is so true. And that's the kind of ignorance I want to deal with  - the blissful kind.

Sometimes it's better not to know everything. I used to be so observant about everything around me and frankly, it drove me nuts. To know that people were staring…to hear what people were saying…it really made me paranoid and defensive. I always thought once I stepped out the house, it was not safe. So I would immediately put up a wall of protection and be ready to go to “war”. Whenever I’d go out, I’d always have words with at least one person or flip off someone with my middle finger. It never failed. I’d go home, feeling drained and defeated because if this was my fate, how was I supposed to be 100% happy? I was spending too much time, fighting the world.

However, acceptance is everything. It is certainly not easy but it is necessary in order to live a happy life. Once you accept that you can’t make everyone happy and that what’s most important is your own happiness, it makes dealing with ignorant people so much better. I also learned that if you looked at the reasoning behind someone’s words and understand where they are coming from, it makes it easier to not let it affect you. Just know, at the end of the day, you’re not the problem. They are. You are entitled to be who you are and live in this world just like anyone else, no matter what anyone thinks. 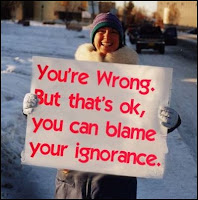 One of the characters on The New Normal said something during this week’s episode that really resonated with me. He told his partner that instead of dwelling on the losses, we should celebrate the wins. What a great way to look at things! For every ignorant person out there, there is someone who supports and celebrates people who are different. There are people out there who do not judge someone on their size, race, gender or sexual preference.

I think, while we do still live in a world where ignorance and hate still reside towards big people, it is not the majority way of thought as it once was. I feel a shift coming. Women are becoming more comfortable with their curves and accepting that not everyone is meant to be a size 0. The “Health at Every Size” movement is growing. Plus-size fashion is becoming a big business. Rome wasn’t built in a day and the world can’t change overnight. But one day at a time, we should celebrate the wins.

If we better ourselves by loving ourselves and owning who we are, we are helping in making the world change. When we show those ignorant people that no matter what they say, we’re still going to go out and live our lives to the fullest, this proves to them that their words have no power. When words have no power, they lose all credibility. By not being afraid to be who we are without shame, we are also inspiring our fellow plus size sisters to be happy and own who they are as well.

This week, I lost a friend because she made a negative statement on her Facebook page about traveling with big people. I was shocked because I considered her a friend and was very hurt by her comment. I was even more hurt by her reaction when I said something about it. She was so defensive and accused me of being sensitive. She then said that since it was her page, she can say whatever she wants to say and not be censored. While that is true, still…what happened to being considerate of others? If you are my friend but have negative feelings about “big people”, then what does that say about how you feel about me? That means she and I would never travel with each other, which in my opinion, is her loss since I have been all around the world AT MY SIZE and have had a blast doing so.

It takes special people to be my friend. I know this. But that just makes me appreciate them even more. When I say “special”, I mean that they have to be considerate, loving, caring and non-judgmental. They have to love me unconditionally and see past my size. They have to not be afraid to be seen with me and not care what the world thinks. Yes, those are special people. So she was not one of the special ones and I severed the friendship.

I also learned that while I do ignore the comments and stares most of the time, it’s okay to say how you feel if someone offends you, especially if it is someone who is a part of your life. Part of changing the world is changing who you let into your world.  Having someone toxic in your life is only going to hinder you on your self-love journey. We deal with enough ignorance from strangers so why should we have to tolerate it within our own circles? I always say, if you’re not down for me 100%, then you’re not really my friend. A real friend won’t smile up in your face and then the next minute, talk negatively about being fat and etc. If you have an issue with your own self-image and don't love yourself, it is not my fault that I, on the other hand, can love myself at the size that I am. I don’t tolerate or allow that foolery into my life.  If that makes me sensitive, then so be it. I own that. I have a right to be that way. If you haven’t walked in my shoes, you have no idea.

So I am on my own journey to finding that balance between blissful ignorance and speaking up when necessary. I pick and choose my battles very carefully. Now I do have my moments when my middle finger has a mind of its own. But I am a work of progress. What counts is that I refuse to limit my life because of what others may think of me. As I always say, you only have one life to live, so why not live it to its fullest? Who knows? I may inspire someone to do the same. All it takes is one person to start a revolution. 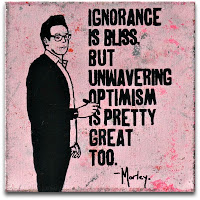