Style File: All Hail The Queen!

The 81st Annual Academy Awards were held in Los Angeles last night, and even more fun than the actual awards show was watching the pre-show red carpet arrivals. I had a blast with my followers on Twitter as we made comments about every dress on the red carpet. Some comments were gushy. Some had just the faintest tinge of snark. Some were just downright spot on.

One particular celeb caught my eye and my approval right away. It was Afrobella who mentioned in a tweet that asymetrical dresses were in this season and that she was certain we'd see plenty on the red carpet. She was dead on, and my favorite asymetrical dress was on the Queen herself! 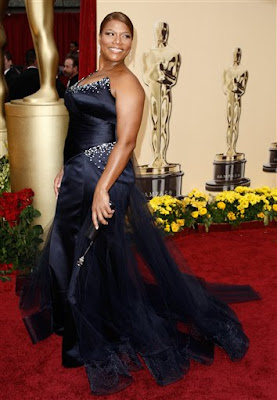 Here, Queen Latifah wears a Georges Chakra gown on the red carpet with William Goldberg diamonds and Gucci shoes, and she carried a Mary Norton clutch. I personally adored the gown, although reactions were mixed amongst my Twitter Peeps. What do you think, ladies? Did Latifah get an award in the Best Dressed category for her red carpet gown?

Can't help it - I'm a big fan of Queen Latifah and always love what she wears.