at 8:00 AM By Unknown
We received the following press release from our friends at the NAAFA about a press conference they are hosting to discuss the Safe Schools Improvement Act (SSIA) which aims to create laws against bullying. (You can read more about the exact bill here.)  What do you think of lobbying for anti-bullying legislation that includes size discrimination? 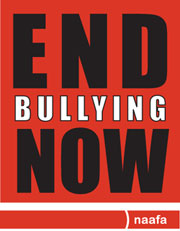 Foster City, CA – NAAFA will host a press conference at the National Press Club on Monday, August 8, 2011 at 10:00AM to discuss an egregious oversight in the Safe Schools Improvement Act of 2010 (SSIA) and what can be done to prevent fat children from being omitted from the legislation’s anti-bullying protections.


The SSIA of 2010 was created to combat the bullying of children in school. This act prohibits bullying based on actual or perceived race, color, national origin, sex, disability, sexual orientation, gender identity or religion. The press conference will highlight why the omission of fat children only weakens the legislative intent of the anti-bullying protections. Earlier this year, two teenage girls committed suicide because of bullying based on body size. A big boy in Australia was bullied to the point of exasperation when he finally threw his tormentor to the ground and the video went viral.

A recent study from the University of Michigan concludes that the odds of being bullied are 63% higher for children who are obese than their classmates of a normal weight.

Yet body size is left entirely out of the equation when we’re talking about protection from bullying! The current version of the SSIA does not prohibit bullying and harassment based on weight, height, or physical appearance. It is imperative that SSIA be amended to include weight and height to protect all our children.

Founded in 1969, NAAFA is a non-profit civil rights organization dedicated to improving the quality of life for fat people. NAAFA works to eliminate discrimination based on body size and provide fat people with the tools for self-empowerment through public education, advocacy, and member support.