The Scene: The Saartjie Project 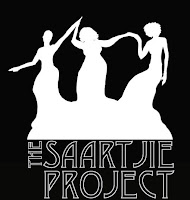 THE SAARTJIE PROJECT presents...
"R/EVOLUTION: DECONSTRUCTING THE MYTH OF THE BOOTY"

The Saartjie Project has garnered national and international attention for its boundary-stretching stage presentation that addresses the complex issues facing black women in society. The collective is named after Saartjie Baartman, the South African woman who, in the 1800's, was paraded around Europe under the show name "Hottentot Venus". She was eroticized and caged to show off her large buttocks to paying audiences. Upon her death her body was dissected and displayed in a museum... and almost 200 years later her remains were finally laid to rest in her homeland. This February Saartjie Baartman's tumultuous life is the catalyst for "R/evolution". Join the collective as they celebrate her humanity and explore body politics through storytelling, drama, song and dance!

Actress and poet Farah Lawal said, "It's amazing to be part of not only this collective, but also a movement of its own. The work we are doing gives voice to the unheard and light to a darker part of history that is still vividly relevant today."

Performances will be held on Friday, February 20th and Saturday, February 21st at the Capitol Hill Arts Workshop (545 7th St. SE, Washington DC). The show begins at 8:00pm nightly, and doors open at 7pm with an Artisan's Market on site.

Tickets sold at the door and $10 advance tickets available at http://www.thesaartjieproject.org/ starting 1.30.09.

ABOUT THE SAARTJIE PROJECT
The Saartjie Project is preparing for its 2009 season, which will kick off with "R/evolution" at the Capitol Hill Arts Workshop. This spring the collective is slated to perform at the Pedagogy & Theatre of the Oppressed International Conference and is currently casting for an Atlanta-based collective.
Departments: the scene, wise