at 8:00 AM By Unknown
Today on Facebook, I learned about a new reality series being produced by of all stations MTV called Chelsea Settles. It is a story about a 23 year old girl--Chelsea--who has dreams of working in the fashion industry. She is bubbly. She is beautiful.

And, to quote the doctor in the trailer for the show, she is "morbidly obese". 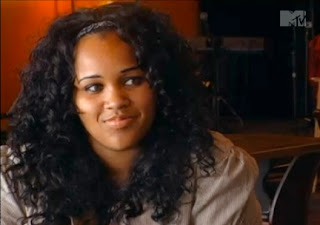 A lot of people are already comparing this show to the Style Network show "Ruby". Other than the shows both being reality series about plus size women, I will hold my judgement of the show until I watch the premire on October 11th. But already, I am loving Chelsea already--because I can relate to her. I've been in that doctor's office and heard the words "morbidly obese". I've walked down the street and heard all sorts of nasty and derrogatory insults being hurled my way. I've done the binge emotional eating after hearing said insults just to momentarily numb the hurt. But I also know those little moments of victory. And the moment at the end of the trailer (watch it and see what I'm talking about)? Those are what life is all about.

What I hope that  is "Chelsea Settles" will give other young plus size women a voice. I hope that it will encourage them to go for their dreams, regardless of what society tells them about what they can and cannot do because of their size. I pray it is not explotative. I pray the message it sends is to love the skin your in and to be healthy at whatever size you are. I am cautiously optimitic, however, because the show will be airing at 11pm. I know when I was a young girl--even an early teen--I had a bedtime well before 11pm. Maybe this is showing my age and teens stay up all hours of the night, but it makes me wonder what the real target audience is of this show?
Will you watch Chelsea Settles when it debuts in October? Peep the trailer here:

I actually am crying after watching that promo. Wow, they got me! LOL. What a beautiful young woman. To think that she doesn't realize how visually beautiful she is is a shame. From a clip, you can't tell how she is a person, but the clip wants you to want to meet her through the show.

watched the trailer and i am very interested in seeing how this show turns out...