The Frugal Files: The Psychology Behind your Stuff..Let Go!!

at 8:30 AM By Frugalicious Diva


Hey there frugalicious ones!! It’s almost time for the holiday!!

I know you might expect some 4th of July frugal food recipes, but not today. We’re going little deeper. It’s been on my mind and I really want to share.

I’ve been getting quite a reputation in my community for being a Declutter Queen…their words, but I accept them. I’m a master at decluttering now, but this wasn’t always my story. I’m an ex pack rat, from a long line of pack rats. My family keeps EVERYTHING!! Sometimes having so much “stuff” is overwhelming and it immobilizes you horribly. I owe my breakthrough to my cousin Angie. She probably doesn’t know it, but she saved me from a life of living under a house of clutter.

Years ago, right before moving into my first apartment, I began to downsize. I asked Angie to help me with the daunting task because it was too much for one person. My room at my parents house was the length of the house, so it was already like a mini apartment, a loft really. I had a shoe closet and a doubled sided, full length closet, an area for my bed, two dressers, a rolling and stationary bookcase, an attic area…plenty of space, for plenty of junk.

So we began to declutter spaces and deciding what to keep and what to toss. She was patient with me as she asked about each item she picked up. My “keep” pile was getting large and the huge garbage can was nearly empty. (This was years before I knew about recycling, so I wasn’t doing it). She noticed my growing pile and no progress and finally just blurted out, “you need to throw this ‘blankety-blank’ away!!” I was startled, began to argue, but she stood her ground. She helped me to see I didn’t need the stuff I was saving.

Now, I pass on that same blessing to others. I work with some of the most difficult people when decluttering. I’m firm, but I’m also sensitive. I KNOW it’s difficult for people to let go and when you begin decluttering, it’s like an irritation of an open, covered wound. Well, I say, rip the bandage off even it if opens up the wound again and LET IT HEAL!!

I’m not a therapist, but I do know people. I know feelings. I know issues. One thing I’ve learned about this process is, if you can’t let go of old stuff, you have them. Big or small, there are underlying issues. Maybe something you haven’t addressed in the past or something you’re avoiding in the future, but something. Have you ever seen the reality show Hoarders? Well, there’s a reason they have a psychologist on staff. It requires an intervention and my cousin gave me mine frankly, kicking my butt into gear to get rid of the junk in my room and in my life.

Now it’s routine to declutter. We’ve chatted a little about this before; if it’s broken, either fix it or get rid of it. If you don’t need it anymore, get rid of it. If it’s no longer loved, say good-bye. Once you get past the initial shock, the task will get easier. I can promise you: letting go will cleanse your soul, it will make you feel lighter and the thoughts of depression, due to being overwhelmed, will begin to subside. This is not necessarily a cure for our deeply rooted issues, but it certainly is a start to the journey of exposing and addressing them.

Recently, I had one of my decluttering clients gasp when I told her I shredded old pictures. Well, my Mom and I went through a huge toolbox full pictures. We saw people we didn’t recognize, terribly angled photos and three of my ex boyfriends. They all had to go. I’m no longer in those relationships, I’m not attached to them and I think my future husband would appreciate me not bringing old flames into our relationship and home. Her response was that I had a desperate love and willing to give up my old memories for a man…I disagree. I still have my memories, but I’m free of the attachment. She didn’t understand that and I know why. She told me she grew up dirt poor, so her entire house reflected that she was actually the desperate one; desperate to hold on to everything because she previously had nothing.

Belles, we have to understand our past is not who or where we are today. We can let go of the past without losing our memories. No one can ever take our experiences away, or the wisdom we learn from them. I’m all for being sentimental about SOME of our keepsakes, but cluttering up entire houses to feel a memory is a problem. Talk to someone and ask an unbiased person to help you go through your stuff; someone who won’t judge you, but who won’t be afraid to challenge you to get rid of your old stuff. 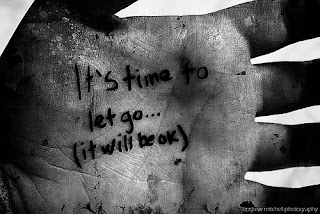 If you’re feeling stuck or stagnant in your life, declutter. Let go of past hurts. Removing the old makes way for the new memories and the new experiences. I’ll leave you with this affirmation:

“Possessions do not feed my spirit. I am liberated from the desire to hoard things. I let go so there is room for something better to come in."
Departments: declutter, frugal files, healing, letting go

I struggle with staying organized and cleaning (I'm the perfect or not at all type which I fight all the time) but once I'm in that zone, I can let it go. My mom, on the other hand, keeps onto stuff thinking she'll use it in the future. It takes a lot of patience and time to get her to get rid of some things but withholding judgement and having patience is the best to help her through it.

You're welcome Amy!! Thank YOU for reading!! Glad it helped!!

Thank you ElizabethSheryl!! Patience is definitely something we need to have when dealing with decluttering. We have to be kind to ourselves and others as we go through the process. It's like breaking up and sometimes requires recouping. I appreciate you stopping by and reading!!